Neuron is the main cell of the Nervous System. It is an electrical excitable cell that is responsible for the transmision of the nerve impulse. With it, they process (in the brain, ganglia and spinal cord) and transmit information.

The other type of cell is glia, which protects the former.

Neurons do not reproduce like many others type of cells (they are amitotic, they do not have mitosis). Their DNA copying is blocked. Thus, they usually don't regenerate (except for aferent and eferent neurons) and have to be protected from damage by the glial cells. The regeneration is done via Schwann cells (glia).

Neurons form nerves. Nerves can be up to 1 meter long (the nerves controlling the legs, for instance). 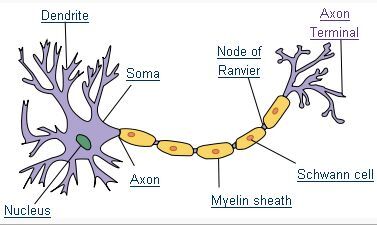 Associative neurons are the most complex type of cells that exist. They form complex neural networks on the brain and its adjacent structures. They are responsible for conscience and voluntary movement in animals. See brain.

This article is a stub. You can help the Neuroscience Wiki by expanding it.

Community content is available under CC-BY-SA unless otherwise noted.
Advertisement